Covid-19 Alert: Santee Pest Control Company is still open for business. For the safety of our employees and customers, we have taken precautionary measures to help slow the spread of the COVID-19. We are evaluating the situation & will continue business operations until further notice. 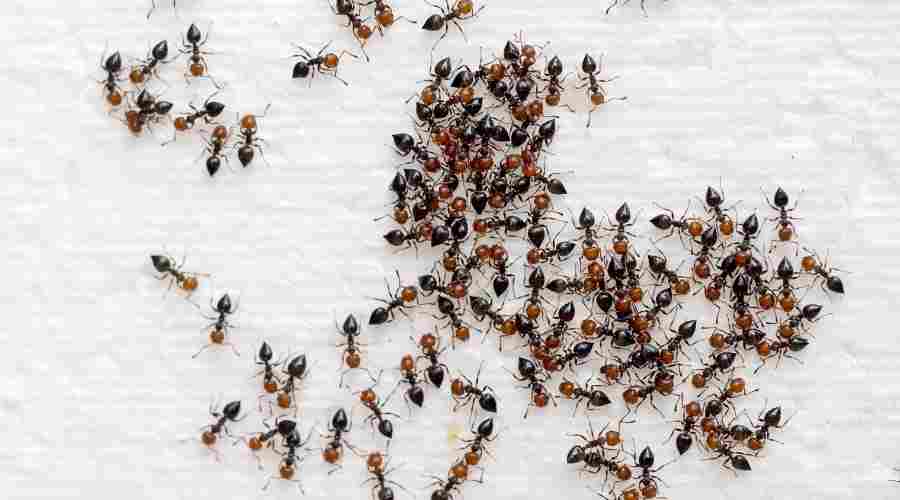 Ant Invasions are Determined by Weather, Not Pesticide Use: A New Study Explains

It is believed that there are roughly one quadrillion ants on the planet. To put that in perspective, it infers that for every person on Earth, there are around 150000 ants. Anyone who has dealt with ants knows they are a formidable foe, and apparently, it is impossible to do enough to get rid of them completely. They can break into our kitchens, take our food, and appear in any room of our house without any indication. The use of pesticides can kill a handful of ants, but the majority will indeed escape.

According to a new study published in the journal “American Midland Naturalist” by Stanford researchers, using household pesticides, bug sprays, and baits is ineffective in preventing ant infestation.

“People spend a lot of money on year-round pesticides, but it’s not the pesticide that keeps ants out of your house; it’s the weather,” explains Deborah M. Gordon, associate professor of biological sciences and lead author of the study.

Gordon has recently received a Guggenheim Fellowship in recognition of her research on ant behavior. She is also the author of the book “Ants at Work: How Insect Society Is Organized.”

Gordon and her team surveyed the homes and apartments of the greater San Francisco Bay Area for eighteen months. The area is primarily plagued by the Argentine ants (Linepithema humile), an invasive South American species that came to California about a century ago.

Due to a lack of natural adversaries, Argentine ants have taken over significant sections of the country, eradicating local ant species and invading homes regularly. The invasive insect has also become a common nuisance in other places of the world with mild winters, including Australia, South Africa, and Hawaii.

How does weather affect ant infestation?

Gordon and her research team are the first to look into a phenomenon that the people of California have long suspected: most Argentine ant incursions happen during summer droughts and winter rainstorms.

“Our goal was to determine if there really is an association between ant invasions and weather, and if so, does pesticide use affect the intensity of infestation,” says Gordon.

The researchers examined multiple residences in California’s Silicon Valley to find a link between ant infestations and weather. The team asked the participants to estimate the number of ants that infiltrated their houses each week and whether they used pesticides to combat the invaders. Gordon and her team gathered weekly temperature and rainfall data from adjacent weather stations for comparison.

According to the study’s authors, the survey’s findings revealed an astonishing connection between weather and infestation.

“Ants are most likely to enter homes in cold, wet conditions, typically in the winter in Northern California,” they write, adding that the extent of the infestation is lower during hot, dry conditions, such as in August and September.

“The result that ants enter homes in particular weather conditions, and are absent from homes in other conditions, suggests that in certain conditions the ants prefer to be outside.” Gordon and her colleagues concluded.

In an attempt to get rid of the pests, research participants used a variety of natural and poisonous ant killers, including:

While several items did lower the ant density when the infestation was intense after a downpour or during times of drought, none of these items were efficacious in preventing ant invasions entirely. Sprays were only marginally more efficient than home cleaners and baits in removing ants at the time, with herbal and natural therapies being the least effective.

“Our study shows that Argentine ant behavior is tied to the weather,” Gordon says, adding that ants are likely to visit kitchens and dining rooms to avoid scorching heat or excessive moisture, and there are nothing humans can do to stop them.

What is the best practice to get rid of ants?

Gordon is a firm believer in eliminating ants without using harmful pesticides. She claims, “Pesticides are toxic to people, to our drinking water, and the San Francisco Bay.” Gordon adds, “By putting out ant killers when there’s no infestation, we’re only harming ourselves.”

Gordon says that hygiene is also irrelevant when it comes to ant infestations. Although ants may consume some food in a kitchen or pantry, they are attracted to your home primarily because of the weather.

Instead of using pesticides, apply safe, alternate strategies to keep ants out of your house, whether it’s raining or there’s a drought. “Try sealing up gaps in walls where ants could enter or using Windex to clean up ant tracks after they arrive,” Gordon advises.

This study emphasizes that using pesticides to plummet the number of ants is pointless and the “main reason” for fewer ants invading your home is a “change in the weather.”

We stay on top of the latest technology and treatment methods so that we can provide you with the most effective and state-of-the-art pest removal services available.

Talk to an Expert Now!

Santee Pest Control is a locally-owned residential and commercial pest control company for more than a decade.